Art that Inspires Me

I’m taking a directing class this semester, and the instructor has asked us to write about three art forms that inspire us. This is either the easiest assignment I’ve ever had… or it’s impossible! I haven’t met an art form that doesn’t inspire me! I’ve noticed that my sources of inspiration are as varied and mercurial as the weather, and tend to be affected by whatever I’m doing at the moment. Right now, I’m riding on a bus with a group of about 40 visual artists, returning home from an all-expenses-paid weekend in Jackson Hole where we attended the Western Design Conference. To sell one’s artwork, the Montana Artrepreneurship Program that sponsored the trip recommends focusing on one medium, but I’m highly resistant to this idea. Part of my motivation for studying film is that it combines into one art form so many of the skills and interests I’ve had since I was young. 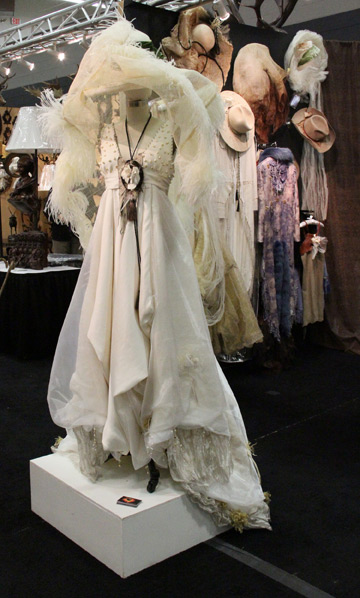 1. I started singing and dancing when I was a wee tot, but I think of sewing as my first visual art form. I made my first dress in Brownies when I was eight. I went on to make wedding dresses for a living in my early twenties. I was a textile minor in art school the last time around, and I make batiks which uses dyes on fabric. Last semester I had a costume design 2 class, which was a bit like coming home. So it stands to reason that my first example of inspiration would be a dress at the conference made by a Montana artist named Celeste Sotola. Celeste’s entire collection is a marvelous mixture of unexpected textures and materials. We spoke for an hour about her collection, and she showed me a book of personal drawings she was working on for the Smithsonian, with the theme of Native American homesteaders. We discussed their resourcefulness and their poverty. The “broach” on the front of the dress is made of a tin can, but evokes an old-fashioned cameo broach. She calls this example her “burlap dress.” The burlap itself is a modern fabric, but woven openly like burlap, and is layered between the gauzy top layer of organza and underlayment of silk. Burlap was sewn into clothes by pioneers who had no other fabric available. The juxtaposition of lowly burlap with the high art of a wedding dress is very intriguing to me. All of her work is an exquisite fusion of assemblages that evoke surprise and delight. 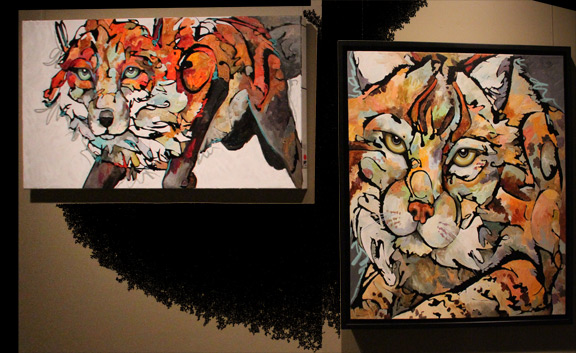 2. Since my early training in art school was as a painter, I was inspired by many of the paintings I saw this weekend. I’ve chosen these Amy Reinholtz pieces as my second example for several reasons. The gallery in which they were exhibited had hung the work in an interesting and unusual way; from the center of the ceiling rather than against the wall. This gave them a three dimensional aspect. The paintings were backed by matte board panels that were also painted in a loose, abstract manner, with a suggestions of words scattered about. Those factors weren’t the primary reason I was drawn to this artist. It’s also about content and style. The large body of work was a unified collection of wildlife close ups, with a strong sense of color and bold black outlines. What was most striking about these portraits were the eyes, which look directly at the viewer in a most engaging manner, giving each one a distinct, and almost human-like character. 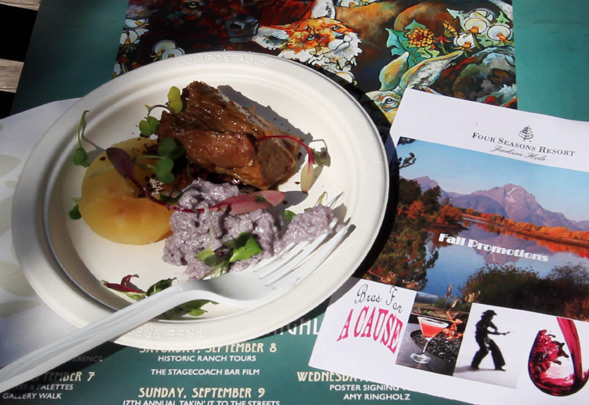 3. With so many artforms to choose from, picking the third is tough. To carry on with the theme of current inspirations from the Design Conference weekend, I’m going to go with cuisine. The final day in Jackson featured a Sunday-in-the-Square food tasting event. Choosing which booth to sample wasn’t easy, since all of the dishes were exquisite miniature paintings that not only pleased the eye, they had the added effect of making my mouth water too. Being in the mood to try something new, and influenced by the extravagance of the location, I finally settled on the lamb confit from the Four Seasons Restaurant. (Besides which, my partner had helped build their resort in 2002, and the Four Seasons itself evoked memories of living in New York. Together, these reasons made it a shoo-in!) I’m not generally big on lamb , but after tasting this, I was definitely glad I had chosen it over the others. During my years in New York, I had worked as a waitress in a number of upscale restaurants, and I even owned a restaurant some years ago, so I’ve eaten some great food in my time. This dish, my friends, was I-have-died-and-gone-to-heaven delicious.

As I was writing this, I noticed something interesting: One thing all my examples have in common is the element of surprise. And who doesn’t like a nice surprise now and again?

Artist-owned giclee print shop and art gallery in NW Montana, on the Flathead River near the National Bison Range. Free delivery to Missoula. Crystal is just a few assignments away from completing her BA in Media Arts at the UofM Missoula.
View all posts by admin →
This entry was posted in Art, Events, Photography, School Assignment and tagged Art, Costume Design, Food, UofM. Bookmark the permalink.