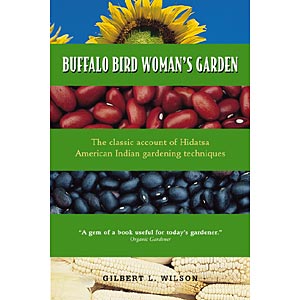 A book review for my Cultural Anthropology class.

Buffalo Bird Woman’s Garden is a ethnobotanical monograph written by Gilbert L. Wilson, which documents traditional agricultural techniques practiced by the Hidatsa Tribe of North Dakota, as seen through the eyes of Maxi’diwiac, or Buffalo Bird Woman. Originally published in 1917 as Wilson’s doctoral dissertation, the current edition includes a 13-page introduction by anthropologist Jeffrey R. Hanson, providing the reader with historical and cultural data which gives context to the material in the book. Here’s a brief outline from Hanson’s introduction:

Buffalo Bird Woman’s Garden is a classic anthropological document on Indian agriculture. [She] provides deep and encompassing accounts of agricultural practices and related activities: methods of planting, harvesting, and other seasonal tasks; descriptions of food processing, cooking, and storing garden produce in well-built cache pits; the organization of women’s work as it pertained to caring for household gardens; assisting neighbors during crucial periods of the agricultural cycle; the enculturation of young girls in the household into responsible adult female roles.

The book’s table of contents provides an excellent guide to the topics covered, with detailed subheadings and page reference numbers. Of the 13 chapters, nearly half are simply titled by a specific crop name — sunflowers, corn, beans, squash and tobacco; the remainder by tool or technique. Illustrations of garden plot maps, tools, drying racks, cache pits and other items are provided throughout the book; drawn by Wilson’s brother, Frederick, and based on original sketches made by Buffalo Bird Woman’s son, Edward Goodbird. A dozen photographs taken by Wilson himself are also included.

Though Buffalo Bird Woman never learned English, Wilson faithfully transcribed conversations he’d had with her over a number of years, so the book reads like an autobiography. It is an account, in her own words, of a traditional Native American woman’s life and her position within her tribe. Wilson also got “all he could” from her brother, Wolf Chief, and son Goodbird.

Buffalo Bird Woman’s village — Like-a-fishhook — had been established in 1845 when she was four years old, and was abandoned in 1880. This period encompassed the extremely disruptive U.S. reservationization policy which was being implemented all over the country. Though not given to emotional exposition, the reader knows it must have been very difficult for her to live through the loss of her tribe’s land and culture; being a powerless witness as her traditions were inexorably supplanted by mechanization and other disruptive factors. The policies instituted by the whites must have seemed not only terribly unfair, but, one imagines, almost incomprehensible to her.

On numerous occasions throughout the book, she noted that the methods employed by the whites were not nearly as effective as the traditional ones had been, nor did they generate enthusiasm among her people. With years of experience to draw upon, she was able to assess the comparative value of crops as they were grown traditionally to the newer, less nutritive or efficient methods.

She had already been living on a reservation for many years when Wilson began working with her, and fortunately, had been able to continue some of the same gardening techniques her people had been using for countless generations. As evidenced by her narrative, she had a remarkable memory, and was also able to recall with exceptional detail former methods that were no longer in practice. She was quick to point out when she was uncertain about something. Clearly, Buffalo Bird Woman cherished her way of life. There were tried-and-true reasons for why they did things the way they did, and she explained what they were to the best of her ability.

We are taken step-by-step through the process of preparing the ground from scratch; from the dimensions of the garden plots — which were determined by the number of people who would be fed — to how the allotments and labor were divided. We are instructed on how to gradually increase the size of the garden in a way that is sustainable, and for how many seasons the land may be expected to produce before it is necessary to let it lie fallow. We learn about why to choose certain seed over other varieties, and how to anticipate their viability.

We follow Buffalo Bird Woman through a season’s planting, beginning with “sunflower planting month” in April — the first crop to go in and the last to be harvested — through the course of days which must pass until the following crops go in. She explains the conditions under which the best yield may be gotten, weed management, and how to plan for contingencies, such as a dry season. There are recipes for cooking. Harvesting becomes a process that is fluid and integrated into their daily routine. One can even say that the methods may be characterized less as techniques and more as lifestyle, because of the seemingly-natural flow of their days. For example, at the proper time, squash blossoms were harvested as a crop in their own right, just as tobacco blossoms were. There was a rhythm to the cycles, as part of a system that had sustained them through eons. Patterns gave way to ceremony, which were integrated throughout. Established rituals were based largely upon their position during the cycles.

Of primary interest were the chapters which described the preservation and storage of the harvest, and the saving of seeds for next year’s crops. The diagrams are of particular importance. It was imperative that proper procedures be taken to ensure that the foodstuffs would not spoil, lose their nutritional value, or be exhausted before the next growing season. Live was more difficult for families who planted too few crops. There wasn’t a grocery store down to road where one could go to replenish their stock!

In our current time and culture, where mechanization and consumerism has largely removed our familiarity with and need for growing our own food, where we have lost our connection to the land, it is often fashionable to romanticize traditional Indian ways, and hold some vague notion that if we return to them, we will live in peace and harmony. We long for a more sustainable future, while fearing that we may have gone too far to stop what could prove to be a very rough time ahead. This book, while not a certain cure for what ails us, may be a partial antidote, providing us with a framework for where to begin. It can give us a model for how to gently coax the secrets from the soil and cooperate with nature, rather than trying to seize its treasures with brutal willfulness. From their example, we are taught that nothing need be wasted. People can live and work as a community; where sharing the labor and the harvest is not just a virtue to be imposed, but a natural outgrowth of what it means to be human. Living with nature means having a sense of it as an extention of us, to be nourished and cared for so that it may care for us in return. Cooperation, not competition, is the more productive way of doing things. It’s not only possible, it’s natural. It does not impose a hardship to be endured or deprive people of their independence. Indeed, the modern way of competing for goods and never having enough is destructive, unwholesome, and unsupportable; as recent evidence has undeniably proven. Many kids these days can’t identify common vegetables, and that’s a tragedy. Our current system does not make us independent, but rather it enslaves us; keeping us trapped in a perpetual downward spiral of toxic unsustainability.

Because most of us now live in urban settings with little land at our disposal, this book may serve as a consideration for a community endeavor. There has been a growing awareness that we need to build both closer communities and good wholesome food sources if we’re to retain our health and well-being going into the future. We’ve seen the burgeoning of numerous movements and organizations with this as their aim, and the proliferation of community gardens and natural food co-ops. The locavore movement, the gardens-not-lawns movement, the Slow Food movement are just a few of the ways food activists are challenging big agri-business… even if they don’t think of themselves as activists!

This book is especially interesting to me because I live in a rural farming community on the Salish and Kootenai Reservation, and am surrounded by organic growers. One of them has just this winter started a community garden project with the grade school children by having a truckload of buffalo dung dumped on the spot! I will be documenting the process on film throughout.

I’ve worked in restaurants off and on all my life; from Burger King as a teenager to the Eiffel Tower Restaurant in Las Vegas in my 40s! (…where a certain bottle of wine actually sold for $20,000!) I owned a restaurant for several years during the Bush era, and we proudly served locally grown buffalo and other products from the region. I’ve been entertaining the idea of reopening, but with an additional educational component; offering classes that teach some of the kinds of skills discussed in this book. My community is a gold mine of knowledge and expertise, and I’ve had gardens for much of my adult life. Integrating information I learned from Buffalo Bird Woman’s Garden seems as natural to me as planting sunflowers in April.

——–
These are notes from the book by anthropologist Gilbert L. Wilson, which I will assemble later into a readable post.

Buffalo Bird Woman (born 1839) was from the Hidatsu Tribe in North Dakota, and these are traditional methods for gardening. These are her words, not Wilson’s interpretation. My comments are in brackets.

• Starting the garden; clear the roots down about as deep as the length of your hand. Knock the soil off the roots, and throw them into piles to dry for several days. Burn piles with other brush either in the space you cleared or nearby. It softens the soil [and adds nutrients; alkalines].

• Clear new areas each year to expand the garden in the summer or fall, and let it lie fallow til the next spring. Small tree roots were left to rot.

SUNFLOWERS:
• April — “sunflower planting month.” First crop of the season to plant, last to harvest. Plant as soon as ground can be worked. Three seeds planted in a hill, at a depth of the second knuckle. Planted around the garden periphery, eight paces apart [an aesthetic choice]. Harvest when the petals fall off, and the back turns yellow. [Theirs were almost a foot across!] Place upside down in the sun for about four days. Frost seemed to bring out oils in the seeds, which they esteemed. They made an oily meal by pounding in a mortar after being parched [roasted] in a clay or iron pot set in coals. Roast until the seeds are dry. [I think they kept the shells on.] The meal could be made into balls, that were an energy food! Balls could be mixed with pounded parched corn meal 1:1.

This meal mixture could be cooked with dried, sliced squash; a winter food.
——
CORN:

• Corn rows were planted in hills about 4′ apart. Not crowding helped in dry seasons. Clearing roots between could take place after corn was planted. Thresh early in October.

Artist-owned giclee print shop and art gallery in NW Montana, on the Flathead River near the National Bison Range. Free delivery to Missoula. Crystal is just a few assignments away from completing her BA in Media Arts at the UofM Missoula.
View all posts by admin →
This entry was posted in Growing Food, Native American, Sustainablility. Bookmark the permalink.