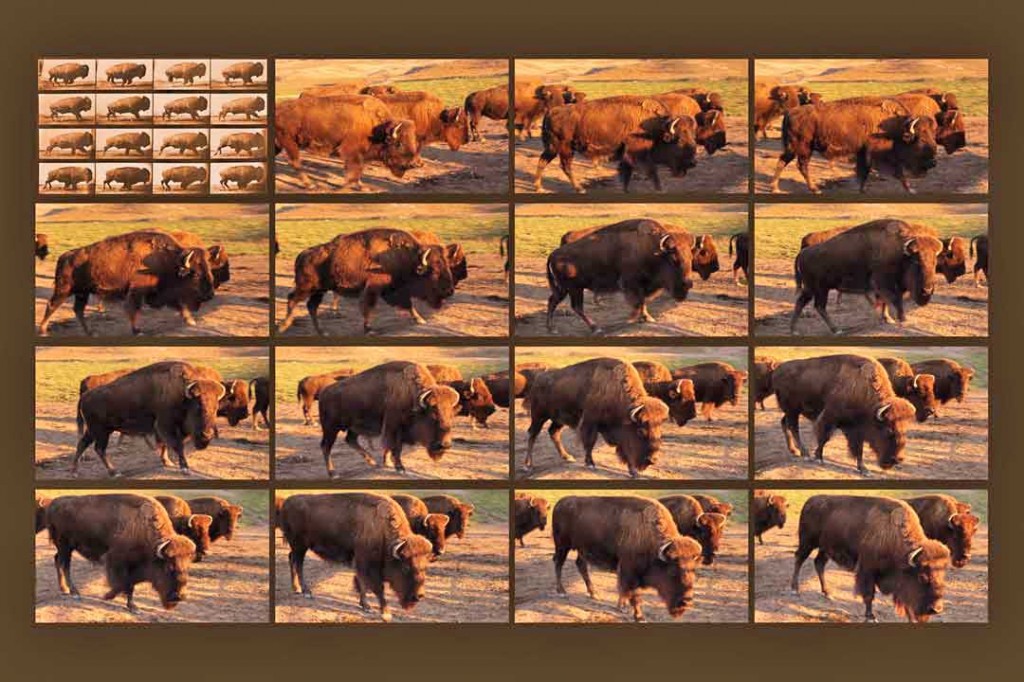 It all started with a bet in 1878. Eadweard Muybridge realized you could string a series of still photographs together and make them appear to move. Muybridge’s first film was of a horse galloping, but he also made an early film about buffaloes. This is a piece I made in homage to Muybridge, from footage I took at a friend’s ranch.

In our culture, we watch a lot of film. I’m often amazed when I hear people talk about it or when I read critiques on Netflix or Rotten Tomatoes. People are very sophisticated in their understanding of film; how it’s done and why something works. Even young kids can talk intelligently about it. I’m sometimes a bit dismayed that the average 12 year old seems to know more about film than I do, and I’m studying it! Technology has become so commonplace that everyone has it and they know how to use it. Filmmaking jargon is part of our lexicon.

Things weren’t always this way, of course. Here is an interesting take on how even the discussion of filmmaking was elitist until recently! The site is published by the University of California Press, and it’s full of interesting info, if somewhat outdated, with an extensive number of pages.
—-

There are thousands of websites that detail the technological achievements of the next hundred years, but I’ll just post one here for good measure: Wikipedia, of course! This link gives a good overview of tech evolution in film. Let’s fast forward to when indie films began to have an influence on the major studios.

Add the word “independent” in front of “film” on Wikipedia, and there it is. It’s all about money. Money is what drove new technology, and it also inspired all the indie film movements. As long as there have been big movie studios, there have been movements to resist them; to work outside of their confines, to tell stories that weren’t being told by the industry, to use talent that wasn’t recognized by the moguls. (Speaking of moguls, check out this TCM page.)

The efforts of the Society of Independent Motion Picture Producers (SIMPP) and the advent of inexpensive portable cameras during World War II effectively made it possible for any person in America with an interest in making films to write, produce, and direct one without the aide of any major film studio. (Wikipedia, Independent Film.)

One such auteur was Orson Welles, who co-wrote, produced, directed, and performed the lead role in Citizen Kane. Though the film was made within the studio system, it went on to inspire young, independent French filmmakers such as Francois Truffaut, Godard, Cocteau and others, who also wrote and directed their own critically acclaimed films in the 50s.

The popularity of European independent film made it across to America, just as many of the large studios in Hollywood were collapsing. New technology — widescreens, Cinemascope, stereo sound, to name a few — was continuously being invented to hold the public’s interest, but audience share continued to dwindle. This may have been due in part to the invention of television, but it had a lot to do with the perception that the large studios were corrupt and resistant to change. We’d seen it all before. Indie films and independent artists breathed new life into the art form then, just they continue to do today.

Here’s a personal story from that era. I remember going to the theater to see the landmark film Easy Rider with my grandmother, of all people. The year was 1970, and I was just about to enter high school. She snored through the entire film, as I was transfixed by what I was seeing on the screen. In retrospect, I think that movie had a huge influence on my life. I wasn’t as wild as the characters in the film, by any stretch! But as a child of the 60s, that movie — and Steppenwolf — sure shaped the way I looked at the world… and film.

As for recent technological breakthroughs, YouTube and the internet represents two of the biggest and best if you ask me! That, and the invention of the Canon 7D, of course.

Where is film headed technologically? According to a Forbes Magazine article, crowdfunding sites like FilmBreak and Kickstarter are opening up new opportunities for indie filmmmakers, and will be with us for some time. Costs for equipment continue to drop, and for students or people on a tight budget, there’s always the option of buying used gear.

As for what the big boys will be up to, if history is an indication, money will continue to drive the development of ever more exciting, faster, complex gear. It’s hard to say what might come from the mind of someone like James Cameron, who has deep deep pockets and an unrivaled determination. We know that internet speeds will continue to increase, making entertainment delivery better and guaranteeing an ever-growing audience. Storage space is getting cheaper every day. (I just bought a three terabyte drive for $125, which is ridiculously cheap.) I’m not sure 3-D will be with us indefinitely, but perhaps it could evolve into something like holograms. Some companies are working on that now. Hello space fans! I think the future is already here.

Artist-owned giclee print shop and art gallery in NW Montana, on the Flathead River near the National Bison Range. Free delivery to Missoula. Crystal is just a few assignments away from completing her BA in Media Arts at the UofM Missoula.
View all posts by admin →
This entry was posted in Film, Hollywood, Internet, School Assignment, Technology, Video. Bookmark the permalink.